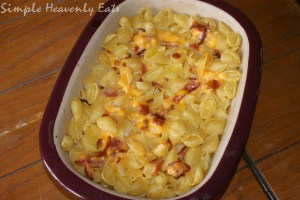 Ok. So the name of this mac and cheese may not be the most inviting, and I will be the first to say that there is nothing healthy about this recipe WHAT.SO.EVER! Nope, not even with the little substitutions I put in to make myself feel like it was healthier, it’s not. Plain and simple! However, once in a while you just have to go for it! You have to try this recipe, at least once, just make sure you take a nice long walk or jog after dinner. This mac and cheese tasted so good and I do live in the South where Mac & Cheese is considered a vegetable right? It has to be true, it’s on a sign hanging above my doorway;-) Mac and cheese is great alone, but when you spruce it up with bacon and diced onions, you just really cannot go wrong! Here is the recipe for you to enjoy.

3/4 lb low sodium bacon (or any bacon), fried and crumbled into chunks, set aside the grease after you saute onions in it

Milk (approx. 3 cups, I didn’t measure, eye it. I used skim to attempt it to be healthier, but really, you might as well just use whole if you’re eating this, and it will be thicker with whole)

In a frying pan, ( I was so excited to use my new Lodge cast iron!) cook the bacon and set aside then crumble when it cools. Right away saute the onions in the bacon grease, in the same pan you just cooked the bacon in. Hello Flavor! Set aside grease. In a large pan boil water and cook pasta as directed. Cook pasta and if it finishes before the cheese sauce just set aside. Place the butter and milk in a large sauce pan and heat on medium heat until butter is all melted, stir often as to not scorch the butter, we don’t want burned butter. While the butter is melting into the milk slice the cheese into chunks. When the butter is all melted into the milk, add the cheese. You want to continuously stir this now until the cheese is all melted in to avoid burning, cook this on a medium-low heat. When the cheese melts and you have a nice cheese sauce, add the cornstarch mixture and keep stirring for a couple minutes until the sauce thickens. Then add the onions, bacon and bacon grease and mix well. Remove from heat and immediately add the noodles to the sauce then place in baking dish. Bake at 350 for about 20-25 minutes or until it browns and is bubbly. Top with some parsley and ground black pepper. You could also top with crushed Ritz crackers or some bread crumbs but I didn’t because my kids don’t like it crunchy on top. 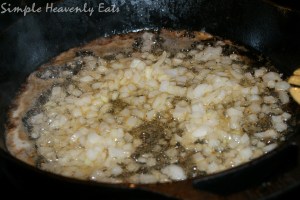 Ingredients for Seasoning the burgers:

In a large mixing bowl combine the meat, onion and cheese, mix well until blended then form patties. Sprinkle raw burgers with the seasoning mixture before grilling, coating well. Grill for about 20 minutes. My husband does this job, he is the best man on the grill ever! He makes them nice and pink inside and super juicy every time! Serve on buns with whatever toppings you like!

Look at those grill marks! I would seriously eat it just like that if I weren’t worried about bacteria!

Seriously try this, you won’t regret it, just don’t make it everyday;-) I jokingly called it Heart attack Mac and that instantly became the it’s name but it’s the best Bacon Macaroni and cheese and makes for some rocking leftovers!